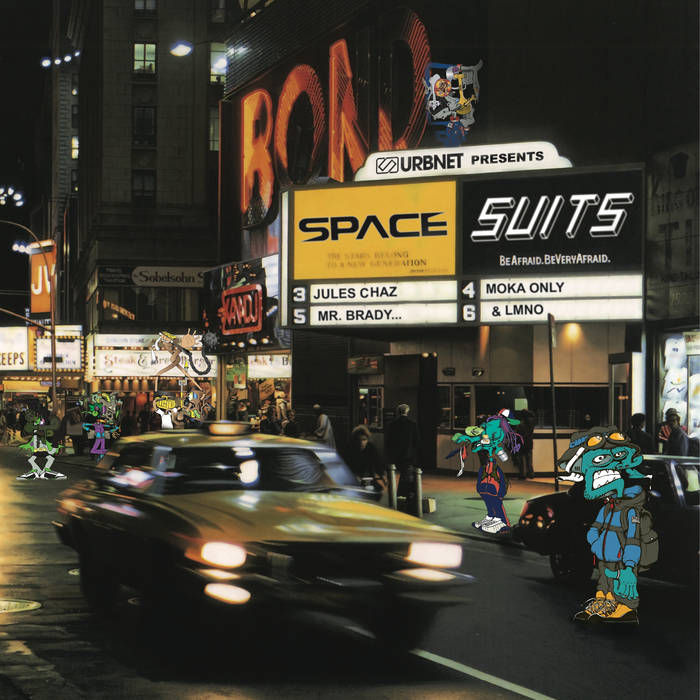 Juan Diaz So fresh to listen to these emcees that vibe so well together! A total revisit of the Battle Axe Glory days! Their antics approach has always been present (pre-Step Brothers / EV & ALC). The soundbytes and obscure samples bring the theme together. This one leaves me hungry for future Space Suit projects. CA All Day! Oh, and Van City too!

"Spacesuits is the result of an organically-formed all-Canadian hip hop group fronted by emcee's Moka Only, LMNO, Mr. Brady, and backed by producer, Jules Chaz. Much like the album's front cover, which depicts a handful of animated alien-like characters hanging out in the real-life city street, the music combines contrasting elements that make for a spaced-out vibe while maintaining the earthy tones that can only be achieved through record sampling. Listen to tracks like Rangers and Nibiru to get a quick taste of the album's juxtaposing nature."
~~ gettin-up.com/2014/10/spacesuits-spacesuits-album.html

“It's always awesome to know that our favorite underground rap dudes are still doing it, and doing it oh so very well. The west coast dream team of Moka Only, LMNO, Mr. Brady and Jules Chaz have a superlyrical fun fest over a gritty beat that has a slight Madlib vibe. Don't get us wrong though, Jules Chaz has a style very much of his own, and these three veteran MC's all go in so beautifully on the beat. If you love dope, smart, fun hip hop....this is for you.”
~~ fingersonblast.com

"What happens when three veteran power houses LMNO from the mighty Visionaries crew, Moka Only with over 50 albums deep in the game, and musical work horse Mr Brady’s rawness let loose over madman producer extraordinaire Jules Chaz beats? You get the eagerly awaited project “Spacesuits”. A perfect long awaited album for the fans of these 3 respected MCs, going back to the Battle Axe days when these dudes were killing the game with “Lyrics of Fury”."
~~ undergroundhiphopblog.com | tinyurl.com/ughhspacesuits

"What happens when three veteran power houses LMNO from the mighty Visionaries crew, Moka Only with over 50 albums deep in the game, and musical work horse Mr Brady's rawness let loose over madman producer extraordinaireJules Chaz beats? You get the eagerly awaited project Spacesuits.

Spacesuits came to light when Moka Only introduced Jules Chaz to Mr Brady a few years back via internet. Jules Chaz sent Mr Brady about 30 beats that He sat on trying to figure out what to do to them. "They were so raw, genius, and out of this world I wanted to approach them right," Mr Brady said. One day LMNO came to record at Mr Brady's studio, and he let him hear the beats. He flipped out and they immediately knocked out a couple of tracks that same day. After listening to them, they hit up Moka Only to do a feature for one of the tracks. The three of them sounded so good together, and they have so much history together from Battle Axe records in the past, it only made sense to asked Moka if he would be down to record the whole album with them. After all, Moka Only was the one to introduce them to Jules Chaz, so it made perfect sense. After listen to a few songs, and how out of this world they sounded, the name and the project Spacesuits took flight.

There effortless cohesiveness is evident with Spacesuits. They bounce off one another, and jump in and verses like the veterans they are. Spacesuits shows their versatility and ability to adapt to Jules Chaz Zany production. With Spacesuits, Not only will you get raw lyrics and beats like the songs Speedy, and _meteor, but you will also get stories with songs like heist and _chicks, as well as a array of spaced out joints and interludes. So grab your moon boots and get ready for lift off because Spacesuits is ready to take off!"
~~ URBNET.COM/SPACESUITS

Produced by: Jules Chaz
Written by: Moka Only, Mr. Brady & LMNO
Mixed by: Mr. Brady
Mastered by: Deeskee
Cuts by: Ld
Artwork by: Rich One / NASACREW

Bandcamp Daily  your guide to the world of Bandcamp

New sounds from Mavi, Ivy Sole & Moderator, plus AJ, the One joins the show, for her latest release